I have moved this blog to my own space - http://kannan.jumbledthoughts.com (RSS)

I won't be updating these blogs anymore here in Blogspot. Thanks.

I have always wanted to own one of those cute O2 XDA Atoms. I was holding back, because of the Atom's notorious stability and the numerous bugs in the software bundle + motherboard. But, when I went to Malaysia recently, I decided to buy one anyhow, because the latest ROM update seemed to make Atom more stable and also I could not stand my wife reminding me daily to get more organized!

I was staying in Penang. I checked out Bukit Jambul complex, did not find a decent enough deal or store. So, I went to Prangin mall in George town. The fourth floor, in the interior wing, is full of computers / electronics stores. Boy, did I have a great time there! I saw the Rw6828 there for the first time, though I have read online a lot about it. It was just released in APAC one week back, not anywhere else!

I got this photo off Pocket PC addict. I will update this with my phone soon.

I also picked up a Jabra BT-800 in Changi airport, on my way back home. Had no problem pairing this with rw6828. Works like a charm. The DSP for noise cancelling really works! There seems to be a firmware upgrade for this. I need to do it this weekend.

I have a Dual processor Xeon machine (HT enabled in both the processors) with 2GB of RAM. Windows XP effectively sees 4 execution pipelines. Yesterday I had to move some 10GB of data from this machine to my laptop. I decided to zip it up first and fired open Winzip 9.0. It was painfully slow! I checked out the Winzip process using Sysinternals ProcExplorer and was surprised to see Winzip doing things (compressing/reading/other operations) in ONE thread! As you can see from the perfmon output, one of my processor was sitting idle, doing nothing! Why isn't Winzip using any threads to speed up things?? I became curious and decided to check out WinRAR 3.40. It is not multithreaded either! Is there some reason why compression programs don't make use of the available CPU power to speed up things?? 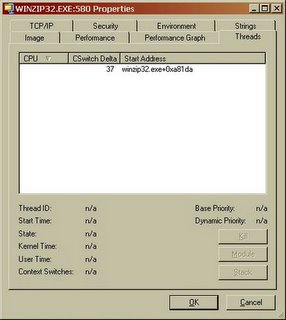 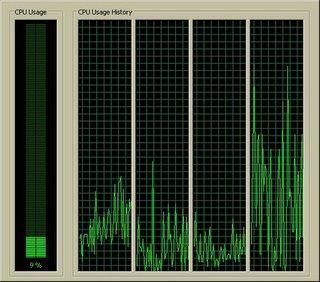 This reminded me of my conversation with one of my customers (internal) last week. I was trying to sell him my teams tool. I setup a meeting requesting him to give us what his generic requirements are (basically what he is looking for!), so that we could make a detailed presentation of our tool geared towards his req. He declined that meeting request asking how he could give me the requirements with out knowing what my tool can do. It took a long time to convince him to tell us what he was trying to do and why he approached our group in the first place! 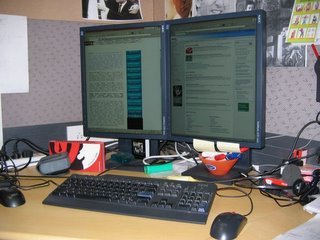 I have rearranged my monitors, this time to make it easier for me to read lengthy contents :)

I got this idea from Adam Nathan' s Channel 9 interview. He was demonstrating his WinFX based Hearts game and was actually going through the code using this setup.

Though I find this setup good for reviewing/coding/reading long documents, it actually a pain with Windows. There is a noticeable time lag in repainting windows, by my ATi driver. I am actually planning to go back to my old setup!

Its been a long time! Too many things have happened since my last post. My to-blog list is threatening to become a monstrous file in my HDD, my married life has permanently caused a dent in my day-to-day routines, my responsiblities in my workplace increased (read that as "I am being tortured more!"), I have got a new neighbour, a new year has started (BTW, Happy new year to you all!), Visual Studio 2005 is officially out (Yeah!!), I learnt about some really cool technologies, I bought a 802.11g router....Whew! Onething that hasn't changed is my bank balance, deciding to stay at the nadir comfortably for ever! :(

Yesterday I came across this Yahoo offer. Yahoo is finally allowing dots in email addresses. Good thing is you dont have to create a new account, instead Yahoo allows you to assosicate another e-mail Id with your existing one. You can get an extra email address here.

I am a big fan of "Carry on" series of movies, esp I love watching Ken and Sid. I am collecting all the movies in this series. Yesterday, I got "Carry on Emmanuelle". This is by far the worst film I have seen, in this series. Centered around "affairs", this film lacks that traditional "Carry on" charm. Keep off this film, if you are new to this series. I suggest you watch "Carry on Up the Jungle" or "Carry on Cowboy" for some real carry-on fun!

Movies I have in this series:

Lately, I am doing a lot of Java / J2EE stuff, since Sudha is in to those technologies. Though I am one of those persons who would prefer to sweat it out with C / Assemly rather than making use of all the making-life-easier goodies offered by Java and related frameworks, I have to admit that my respect for J2EE framework is growing as I learn more about it. It is actually a breeze churning out a quality web application using Struts -- I was able to do that in 45mins, from scratch to deployment! Thats a pretty impressive figure for me...I don't know if web applications of enterprise quality can be done using Microsoft technologies the same way Java technologies allow you to do, I am not an expert in it. But, if any of you have personal experience in these, I'd love to hear your views.

Yesterday, we decided to create our own custom tag library. Sudha wrote a prime number generator tag, a simple TLD and the corresponding taglib entries in web.xml. When deployed, it threw an exception "tag-class not found". What the heck? Then we noticed our DTD was specifying a wrong version. After a quick fix, we deployed it again. Now, it threw an exception that said "PrimeTags definition not found". It seemed that the server (weblogic) couldn't find PrimeTags.class, our Tag handler class. We had it under /WEB-INF/classes. What could be wrong? We wrapped that tag handler in a package and redeployed the same. Now we got another error - "Bad class file. Current version is 49.0, expected is 48.0", a quick search in Google told us that we are trying to mix java1.5 & java1.4 compiled binaries. Resetting the java_home / path variables to point to jdk1.4 solved the problem!!

Now the question is, why couldn't the server pick up our class file when not packaged??